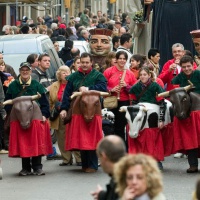 The bouets and the vaqueta, the little bulls and the little cow, are four Barcelona festive figures that form part of the Raval festival parade group.

Their origin can be found in the reference Joan Amades makes to them in his book on Catalan customs, Costumari català. There he notes that correbous (bull runs) were organised in the neighbourhood in the mid-19th century during the Mare de Déu del Carme festivities. Some cardboard figures with horns used to take part that had red skirts to hide their carriers.

There were no further references to them for many, many years until, in 1996, the La Taula del Raval traders and residents' association decided to reclaim them and add them to the neighbourhood's festive imagery.

Today's bouets and vaqueta, all papier-mâché figures, are the work of the Barcelona workshop El Ingenio and they were presented to the neighbourhood on 16 July, 1997, during the annual festival. They have never failed to take part since then, along with Raval's gegants, gegantons and capgrossos.