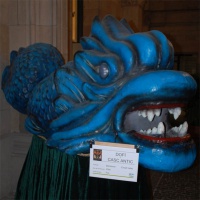 The Barcelona Dolphin is a Colla de Gegants del Casc Antic figure that also forms part of the city's historical animal and mythological figures. Its fanciful appearance makes it look as if it has been lifted straight out of a children's fairy tale, which was typical of the festival imagery renovation process of the 1990s.

The initiative for making the Dolphin came from the Casc Antic colla, who wanted a figure that could take part in fire shows, as well as in street parades and other celebrations. So, in 1999, they commissioned the Cardona image-maker Toni Mujal, who had it ready a few months later.

It was christened in February 2000 during the Santa Eulàlia festivities, at a ceremony attended by all the fire beasts of the Ciutat Vella. They called it Nicolau to tie in with the traditional legends of Catalonia and, more specifically, the fable of Nicolau the fish, which tells the story of a little boy who liked water so much that he turned into a fish and stayed in the sea for evermore.

The Dofí de Barcelona can play three different roles: a fire beast, a children's entertainer and a historical fantastic creature, participating in the official events that implies.

When it is not out somewhere, it can be visited at the Casa dels Entremesos, where it is permanently displayed with a lot of Ciutat Vella's other festival imagery.