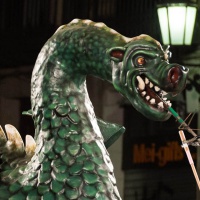 Built in 1987 by
Manel Casserras i Boix

The Ciutat Vella Dragon is a classic dragon that belongs to the Amics dels Gegants Ramon i Lola. It plays a double role, taking part in the fire shows as a fire beast, showering sparks from its mouth, wings and tail, and as a peaceful figure in the official acts of the giants' retinue, the Seguici Popular de Barcelona, when it carries a bunch of carnations in its mouth.

No guild was ever responsible for the Ciutat Vella Dragon, so, following the issue of the Nueva Planta Decree and the subsequent bans in the 18th century, it gradually deteriorated and finally disappeared a little later.

In the 20th century, as part of the city's festival imagery recovery project, it was decided to create the first of the historical figures that were to become the Bestiari Històric de Barcelona: the dragon. The image-maker Manel Casserras i Boix was commissioned in 1987 and, later that year, the dragon was christened the Drac de Ciutat Vella because it belongs to the Ciutat Vella Municipal District Council, even though they immediately handed it over to the Friends of the Giants Ramon and Lola, who are still responsible for taking it out today.

As with most figures in the giants' retinue, the Ciutat Vella Dragon has its own dance, with percussion and woodwind music composed by Joaquim Pujades, that was presented at the start of the La Mercè festivities in 1994.

Throughout the year it can be visited at the Casa dels Entremesos, where it is displayed with a lot of Ciutat Vella's other festival imagery.