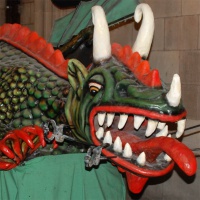 The Gràcia Dragon is the oldest of the neighbourhood's popular beasts and it can be seen in the street parades, as well as the fire shows, on the main dates in the Gràcia festival calendar. It is listed as a drac reptant, a crawling dragon, and, given its size and weight, it has to be carried by two people.

You have to go back to the start of the 1980s to find the origins of this dragon, in a design competition organised by the Gràcia Council Culture Department. The artist Néstor Pellicer won it and the El Ingenio craftsmen Josep Cardona and Agustí Sevillano turned his model into the real thing.

It is one of the oldest dragons in the city, which is why it has had to be restored a couple of times. First, for the 1992 Olympic Games, when it was repainted and part of its head was remade; second, in 1999, when the damaged parts of the papier-mâché were repaired and the wooden structure supporting it was strengthened.

In 2004 the artist Dolors Sans made a lighter replica from fibreglass, which allows more visible, more agile movements.