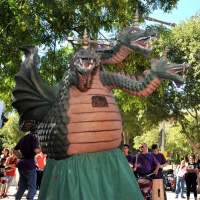 The Sarrià Dragon is a wild beast with three heads that forms part of the neighbourhood's festival imagery. It is carried by one person inside and takes part in the correfoc fire runs, as well as other pyrotechnic displays, with flames coming out of its heads and tails.

The Sarrià organisations came up with the idea of making the dragon because they wanted a fire figure of their own that would be identified with the neighbourhood. They took part in the TV3 programme Dit i fet, which gave them the money they needed, and immediately asked the artist Carles Cabús to go ahead with it. The dragon that appears today is a lighter replica of the one he made.

The original figure was finished in 1989 and christened on 23 April that year, at a ceremony attended by the Gràcia and Ordandai School dragons and the Diables del Tibidabo (today Orgàsmika de Sarrià). It was given three names, one for each head, which recall the three hills that shape the district: Monterols, Putxet and Tibidabo.

Since it was born, it has taken part in pyrotechnic displays in the neighbourhood, especially during the annual festival, as well as city events and celebrations it is invited to. For example, it can be seen every year at the big correfoc during the La Mercè festivities, where it is always carried by the Sarrià group.