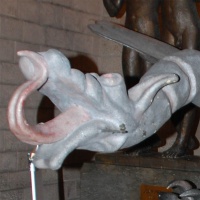 Farfolla, also known as the Sagrada Família Dragon, has a wild appearance and was made to be carried by one person, hidden by purple skirts.  It is owned by the local residents' association, the Associació de Veïns de la Sagrada Família, which is also responsible for the neighbourhood's other popular and festival figures.

The Sagrada Família giant-carriers' group came up with the idea of making Farfolla when they were part of the residents' association. They wanted a beast identified with the neighbourhood that could take part in fire shows. They commissioned the image-maker Jordi Grau, at the El Drac Petit workshop in Terrassa, to do it and he took his inspiration from a dragon discovered in the Sagrada Família church basement, in Antoni Gaudí's storerooms. It is not known whether the master architect designed it though. That original figure is an iron wall lamp that held a light with its tongue.

It has its own dance, which was first performed to mark its tenth birthday in 2008, in front of the doors to Gaudí's temple. Farfolla can mainly be found in correfocs and pyrotechnic displays, in the neighbourhood and around the city, shooting sparks and flames from all the points on its body, often to the drumbeat of the Trastokats, the Fures de Can Baró drummers.