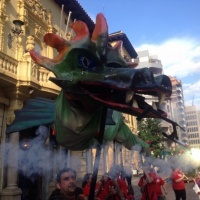 Built in 1984 by
Albert Ciurana i Carmelo

The Flying Dragon of La Sagrera is a fire beast representing a Chinese dragon, with a fibreglass head and wings and a cloth body shaped like a worm. It is nine metres long and has to be carried aloft by four people. It belongs to the Dracs i Diables de la Sagrera and is accompanied by the parade group's other dragon, Sagresaure, on its outings.

It is one of the most experienced festive figures in the city, with thirty years' activity behind it. Albert Ciurana i Carmelo made it in 1984. Since then, it has accompanied the La Sagrera devils and percussionists on their outings in the neighbourhood, the city and elsewhere.

The Drac Volador you see today is a replica of the original, which is now on display at a museum in Romania, where it went for an exhibition and decided to stay.