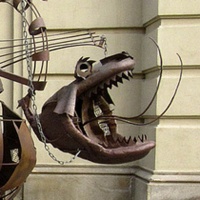 The Guardià is a fire beast from the Les Corts neighbourhood and represents a dragon whose form is inspired from Gaudí's creations. It was commissioned by the neighbourhood's four fire and drummer groups: the Bocs de Can Rosés, the Diables de les Corts, the Repúbli-k de l’Avern fire-run groups and the Diables i Timbalers Ítaca [fire-runners and drummers]. It was created between 2008 and 2009 by a group of students at the Faculty of Fine Arts at the University of Barcelona, based on a design by Pau Cohí, a member of the Diables de Les Corts.

It's the first dragon created wholly out of forged metal and it has a series of gears that give it mobility. Its structure is totally metallic, except its head, which is made out of synthetic fibres. The Guardià is a mobile replica of a very famous dragon designed by Antoni Gaudí and located on the entrance railing to the Güell Pavilions in the Les Corts district. The Porta del Drac is a large sculpture made of forged iron, where a dragon appears with bat-like wings, a scaly body, open mount and winding tongue.