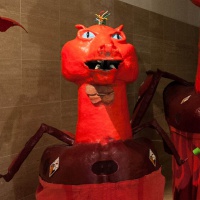 Built in 1997 by
Manel Ollé, Xavier Virgós and Xavier Álvarez

Estarrufadet, the little Poblenou dragon, is a children's fire beast carried by the youngest members of the Colla del Drac del Poblenou. It represents a traditional dragon and was based on the group's big dragon, Estarrufat.

Estarrufadet was born in 1997, when the same colla de diables, or devils' group, decided they wanted a fire beast that could be carried by children in the street parades and correfocs (fire runs). The boys and girls of the children's group, supervised by three builders – Manel Ollé, Xavier Virgós and Xavier Álvarez – made the model with mud, painted the face and helped a lot with the finishing touches.

Like the other festival figures, this little dragon plays an important part in the neighbourhood's festive calendar. It takes part in the main popular culture events at the annual festival in September, and also takes to the streets for the May festivities. When invited, it goes to gatherings of children's groups and takes part in correfocs elsewhere in the city.

And when not out, you can visit Estarrufadet at the Centre d’Imatgeria Festiva Can Saladrigas, where this little dragon is always on display with the other Poblenou figures.