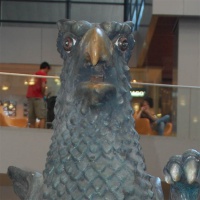 Built in 1994 by
Xavier Jansana

The Barcelona Griffin represents a medieval mythological creature, with the head and wings of a bird of prey and the body of a lion. It is a fiery beast that shoots sparks from two parts of its beak. It is carried by one person and belongs to the Associació de Geganters de les Corts.

The image-maker Xavier Jansana made the Griffin out of fibreglass. It was first shown in Parc de la Ciutadella, on 30 January 1994. Since then, it has taken part in correfocs (fire runs) and various pyrotechnic displays, in the Les Corts neighbourhood festivals as well as the two big city festivals –La Mercè and Santa Eulàlia.