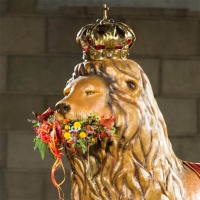 Built in 1993 by
Manel Casserras i Boix

The Barcelona Lion is one of the city's historical beasts. It is a majestic figure wearing a crown, symbolising power.

Centuries ago the lion was associated with religious festivities, especially the Corpus Christi procession. At that time it's possible that it represented St Mark the Evangelist, just like the Bull and the Eagle represented St Luke and St John. There are reports of it in the 15th century, when men disguised as lions appeared on important occasions wearing hides and manes. One report is from 1601 when a figure similar to the one we have today, with a crown and a body, took part in the canonisation of Ramon de Penyafort.

Back then the tanners' guild, which had a chapel in the Pi parish, was responsible for taking the Lion out. They were known as the lleonets, or little lions, because when they accompanied it, among other things, they wore a lion's mask.

In the 17th century it became the most entertaining of all Barcelona's beasts, and the most popular, thanks to the roars and the racket it made when it was performing on the streets. But in 1780, a decree dictated by King Charles III banned the roars and exaggerated performances. The Lion continued to appear at all the events but without behaving in such a wild manner. There are numerous references to its performances, especially during the Corpus Christi processions, which it took part in until 1870.

Then followed more than a century without any trace of it but in the 1990s, with the recovery of the Ciutat Vella's festival imagery in full swing, the Associació d’Amics dels Gegants del Pi decided to remake it. They commissioned the Solsona image-maker, Manel Casserras i Boix, and he finished the job in 1993. From that moment it became part of the giants' retinue, the Seguici Popular de Barcelona, and still leads the beasts and other animals alongside the Eagle today.

The Barcelona Lion has its own dance: the "Ball del Lleó", with music by Jordi Fàbregas i Canadell and a choreography by Xavier López. It was performed for the first time during the Toc d’Inici dance to mark the start of La Mercè in 1994.

Every year the Lion appears for the big dates in the city's festival calendar: Santa Eulàlia, La Mercè, Sant Josep Oriol and Corpus Christi. When not out somewhere, it can be visited at the Casa dels Entremesos, where it is permanently displayed with a lot of Ciutat Vella's other festival imagery.