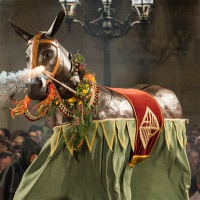 Built in 1988 by
Manel Casserras i Boix

The Barcelona Mule is all dressed up for festive occasions and is associated with the Pi parish.

It has two well-known but different roles. As one of the Historical Beasts and part of the giants' retinue, the Seguici Popular de Barcelona, it takes part in numerous official acts, with a garland of flowers around its neck and a bouquet in its mouth. But it also takes part in correfocs and similar firework displays, with flames and sparks shooting out of four parts of its mouth.

The story of the Mule goes back to 1601 and the celebrations surrounding the canonisation of Ramon de Penyafort. There is a description from that time by Father Ruballosa of a figure with a simple structure formed by a barrel and the body covered by cloth. Then, and, so it seems, for a long time after, the Mule had a very similar appearance to the Berguedà mules with their kick. We also know that the wool carders' guild, which had a chapel in Santa Maria del Pi, looked after it and took it to the festival events.

There is evidence that during the 17th century, and a large part of the 18th, it took part in many processions and celebrations, as well as appearing as a fire beast. In fact, over the years, it became one of the most entertaining and liveliest of all the beastly figures, famous for the firework displays it led.

It was an enormously popular figure to begin with but from the 18th century on, with the Nueva Planta Decrees, its privileges and spheres of activity were gradually restricted because it was owned by a guild. As time passed its fame and symbolism gradually diminished, to the point where it was expressly prohibited from launching rockets, in 1771. From that moment, the Mule's popularity started to wane and we have no more news of it after 1812.

Then, in 1988, with the Ciutat Vella project to bring back its festival imagery under way, the Associació d’Amics dels Gegants del Pi decided to make a new mule, like the one that had walked round the city centuries earlier. However, they decided to go for a more lifelike figure. They gave the job of making it to the master image-maker Manel Casserras i Boix and that same year they were able to unveil it during the correfoc fire run at the Sant Roc festivities in Plaça Nova.

The figure we can see taking part in the cercavila street parades and official acts today is a replica, made in 2005 by the son of the original constructor, Manel Casserras i Solé. The old one is now kept for firework displays.

The Barcelona Mule, like other figures, has its own dance: the "Ball de la Mulassa", with music by Eduard Casals i Ramis and a choreography by Xavier López. It starts off gently but, as it progresses, the Mule dances quicker and quicker, jumping and spinning round.

The replica can be visited at the Casa dels Entremesos, where it is displayed with a lot of Ciutat Vella's other festival imagery. The original is kept at the Pi church, like all the parish's old entremès figures.