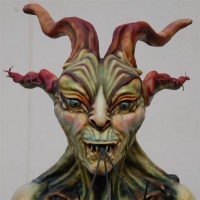 Nébula is a Trinitat Vella neighbourhood fire beast, which represents a goblin of the woods, nature's protective spirit. It has three fire points in its mouth, the structure of a giant and a body that mixes features of a goblin with natural elements: arms like branches and a body made with plant and root forms. A little devil clings to its left arm and acts as its conscience, on the lookout for attacks against nature's balance.

The idea to make Nébula came from Trinifoc, the neighbourhood devils' group. They wanted a figure to liven up the pyrotechnic displays they took part in. The Vilafranca del Penedès artist Dolors Sans was commissioned and, in 2008, Nébula was born: a fusion of a giant and a beast that breathes fire from its mouth. The new figure was presented to the public the same year at the neighbourhood annual festival, with the Sant Andreu de Palomar and Bon Pastor dragons, also made by Sans, as witnesses.

Legend has it that many, many years ago, such a figure helped the people of the neighbourhood fight the abuses of a feudal lord. Since the official presentation, Nébula has taken part in the neighbourhood's main correfocs and beastly gatherings, accompanied by Trinifoc's diables and tabalers. It can also be seen at the main city festivals: Santa Eulàlia and La Mercè.