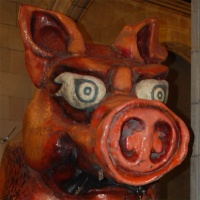 Built in 1995 by
Xavier Erre and Xavier Saló

The Sant Antoni Sow belongs to the neighbourhood colla de diables, or devils' group. It is associated with St Anthony, the patron saint of animals who is usually portrayed in pictures with a piglet.

It is a fibreglass figure and the supporting structure is fitted with wheels so it can move around. Because of its size and weight it needs two carriers.

The idea to build the Sow came from the Diables de Sant Antoni, who wanted a fire beast to accompany them in the correfocs and other pyrotechnic displays. Xavier Erre and Xavier Saló were the artists who created it, in 1995. Since then it has accompanied the colla on all their outings.

The Sow has a double role. You can see it showering onlookers with sparks in the correfocs, as well as in daytime street parades, entertaining the public by throwing confetti and "snorting" water over them.

It is the star of the fire show organised every year during the annual neighbourhood festival, for the Feast of Sant Antoni (St Anthony), and can also be seen at other events and celebrations around the city, accompanied by devils dancing to the drumbeat of Toca’l 2.