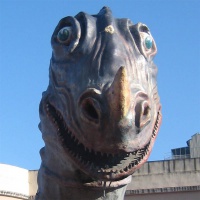 Sagresaure was the first fire figure among the city's festive and popular beasts in the form of a dinosaur. It belongs to the Dracs i Diables de la Sagrera and is accompanied on its outings by the parade group's other figure, the Drac Volador, or Flying Dragon.

It is the work of three artists: Albert Ciurana, Ricard Cerdán and Joan Carles Montagut. Sagresaure was born in 1992, on the initiative of the Dracs i Diables who, at the start of the 1990s, decided to add a new beast to their number that could accompany their devils and liven up the La Sagrera neighbourhood's annual festival, which they take part in every year. Today's figure is actually a replica of the original, which was made by the artist Dolors Sans in 2011 and debuted at that year's La Mercè festivities.

Sagresaure can play a number of roles. You find it taking part in all kinds of pyrotechnic displays and correfoc fire runs, with sparks spraying out of 18 different parts of its body, as well as in daytime celebrations and street parades, spraying water out of its mouth.