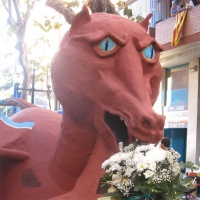 Built in 1992 by
Manel Ollé and Xavier Virgós

The Víbria of Poblenou is a medieval mythological figure, which represents a female dragon with a snake's tail, bat's wings and woman's breasts. It belongs to the Colla del Drac del Poblenou and takes part in street parades and fire shows.

Made out of fibreglass, it is the work of Manel Ollé and Xavier Virgós, who built it in the style and colours of the group's other figures in 1992. That same year it made its first public appearance during the May festivities, where it has been a regular feature ever since. It also appears at the neighbourhood's annual festival in September, as well as in street parades, fire shows and correfoc fire runs around the city.

During the May festivities in 1994, a little boy who liked the Víbria a lot decided to give it his dummy, as a sign of his maturity. Since then it has become a tradition and, every year around this time, the boys and girls of the neighbourhood who have "grown up" bring their dummies to the Víbria, which dances the Ballada dels marrecs in their honour. This "kids' dance" was composed by Ester Álvarez specially for the occasion.

And when not out, you can visit the Víbria at the Centre d'Imatgeria Festiva Can Saladrigas, where it is always on display with the other Poblenou figures.