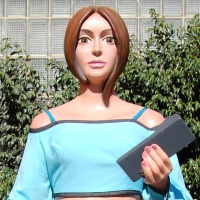 Caterina, better known as Cati, is one of the Casc Antic Giants, the daughter of Peret and Marieta. She is a young retailer from the old town who is about to be paid, which is why she is holding a credit card and a card machine. She has a very modern hairstyle and wears trendy clothes too, including a top that reveals her shoulders and navel. When she has to dress up, she puts on a red and yellow blouse.

The idea to create her came from the Colla Gegantera del Casc Antic. They wanted a female giant (geganta) with a modern image and one that was lighter, so it could be carried around by the younger members of the group, in other words, those that cannot carry the big figures because they are too heavy. At the same time, they did not want one that was too small (a gegantona). They christened her Cati because, like the rest of the giants from the Casc Antic, she is from one of the old town neighbourhoods: Santa Caterina.

The job of making this new figure was given to the Cardona artist Toni Mujal, who based her on a design by Laia Tarragó, a member of the Associació d’Amics dels Gegants del Pi.

Cati made her first appearance in public in 2006 at the Arc del Triomf, at an event to celebrate Commerce Year. She was accompanied by the Casc Antic giants and devils.