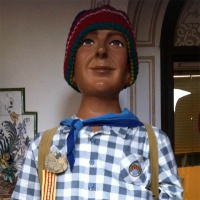 Blauet is a gegantó, smaller than a traditional giant, who represents a young member of the Sarrià ramblers' group, Els Blaus. He wears a check shirt and a blue neck scarf, with a rucksack on his back and a woolly red hat on his head.

The Centre Excursionista Els Blaus, founded in 1920, is one of the oldest associations in Sarrià. So the giant-carriers wanted to pay tribute to them with a gegantó wearing rambling clothes and with a name that reminded people of the group.

Blauet is the son of the Sarrià giants, Gervasi and Laieta, and the work of Jordi Grau at the El Drac Petit workshop in Terrassa, who completed him in 2001. The same year he made his debut at the annual neighbourhood Virgin Rosary festival.

The Colla Gegantera de Sarrià take the young rambler out to take part in festivals and parades organised all round Catalonia, often with his parents. When he's not out and about, he can be visited at the Sarrià-Sant Gervasi district offices, on display with other giants from the area he goes out with.