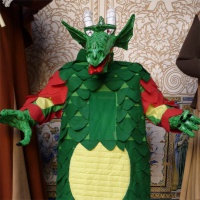 Campisdrak is a small giant that looks like a dragon and belongs to the Geganters i Grallers de la Marina festival parade group (comparsa) .

His is a recent history. In 2011 the neighbourhood giant-carriers decided to expand their group with a smaller, lighter gegantó that the youngest members could carry. They approached the artist Rubèn Masdeu to make it and he did, the same year.

They christened him in June at the Bacanals festival in the neighbourhood, at a ceremony officiated by the "big head" (capgròs) Msgr Filomeno. There as godparents were the gegantona Quimeta Àngels, from Raval, and the gegantó, Paco Candel, from the Marina group.

Since he was born, Campisdrak has been the host of the annual La Marina Virgin of the Port Festival, held in September, along with the other giants and big heads in his group. It is also very common to see him walking around and dancing at the city gatherings and parades he is invited to.