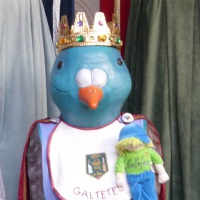 Galtetes is a figure born out of the love between the Colom (pigeon) giants of Sant Andreu de Palomar. He represents a little bird and is dressed like a newborn baby, with soft blue clothes and a white bib with his name. He also has a doll to keep him amused.

The idea to make Galtetes came from the Germandat de Trabucaires, Geganters i Grallers de Sant Andreu de Palomar, who wanted a figure the children in their group could carry, because they were not ready to carry the Avi d’Orient. The Brotherhood's new member means they have giants that children as young as three can carry.

His story begins in 2005, when his mother laid an egg that she and her husband, two giant pigeons, took around with them for nine months. Finally, on 10 June 2006, it hatched and the couple's only son was born. Since then it has been the usual thing to see the Coloms and Galtetes out together.

Galtetes goes out for a walk and a dance at the end of every November, at the Sant Andreu annual festival, where he and the other figures are the stars. When the chance arises, he also takes part in other parades and giants' gatherings, in Barcelona and elsewhere.