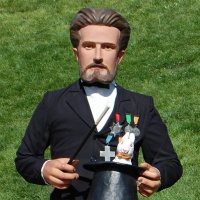 Joaquim Partagàs, better known as The King of Magic, is a smaller giant linked to the Carrer de la Princesa street group. This gegantó is a perfect model of the popular Barcelona magician, who was a member of the Nogués-Rodés giant-carriers' family, its current owners. As his nickname shows, Joaquim Partagàs was the first owner of the shop on Carrer de la Princesa known as ‘El rei de la màgia’. The unique feature of this giant figure is a mechanism which allows a little white rabbit to appear out of the top hat in his hand.

He was made by the El Drac Petit workshop in Terrassa, in 2002. He appeared the same year at the Santa Eulàlia Festival, at a gathering of Ciutat Vella giants. Since then he has usually accompanied the giants Emili and Maria Loreto on their city outings.

Every year Joaquim Partagàs takes part in the male giants' walk, the Passejada dels Oriols, with Emili, as well as the annual neighbourhood festival. And he can often be seen out walking and dancing at other Barcelona gatherings and parades, carried by the Amics dels Gegants del carrer de la Princesa.