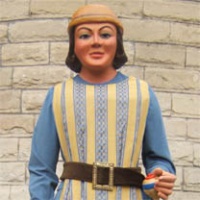 Built in 2000 by
Manel Casserras i Solé

Martí is a small giant from the El Clot neighbourhood, the son of a pair of giants, Clotus and Melis. He represents an apprentice magician and wears a blue-and-yellow-striped tunic, with a skullcap on his head. His accessories are a frog on his right shoulder and a spinning top in his left hand.

The El Clot giants' group came up with the idea of making Martí when, a few years after acquiring the two giants, they realised they needed a figure the youngest giant-carriers could carry. So, in 2000, they gave that task to Manel Casserras i Solé and the same year they were able to present their gegantó at the El Clot annual festival. They called him Martí in honour of the neighbourhood's patron saint.

Martí joins in his parents' dance, which was specially composed by Xavier Muixenc and choreographed by Jordi Vallverdú. They can be seen year after year hosting the giants' gathering in Sant Martí, during the neighbourhood's annual festival, which is also attended by the Sant Josep de Calassanç, Pineta and La Verneda giants.

The Colla de Gegants del Clot, which belongs to the Orfeó Martinenc cultural section, is responsible for taking Martí and his parents out for walks and getting them to dance at neighbourhood and city parades and celebrations. They are accompanied by a capgros, or "big head", Charlie Rivel, and a group of shawm players who add a touch of music and rhythm to the festivities, as well as announcing the giants' arrival.