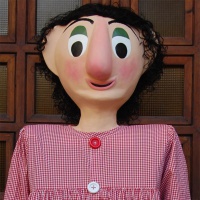 Built in 1984 by
Titelles Babi

Medinet is the son of Estevet and Tuies, or Toietes, two giants from the Sant Medir de la Bordeta parish. A smaller giant, he is a schoolboy, dressed in a nursery-school smock with thin red and white stripes. Like his parents, physically he is a far cry from the classical figure we usually see, because his face and features are childlike.

This gegantó, built so the youngest giant-carriers could take part in the giants' gatherings and parades, first appeared in 1984, some years after his parents. He was made by Titelles Babi and given the name Medinet as a tribute to the parish saint.

After some years of dances and outings, the giant group was wound up and Medinet was shut away with his parents until 1989, when El Drac d’Or in L'Hospitalet de Llobregat dug them out and repaired them, ready for a new period of activity.

Then, in 2009, a new group was set up that was interested in the giants and asked El Drac d’Or, who had looked after them until then, if they could have them. On seeing how badly the giants had deteriorated, they immediately decided to make some replicas, for which they commissioned Pere Estadella. All that means the heads of the original giants are kept in the Sants History Archives.

The new Medinet and his parents went out for the first time in September 2009, since when they have appeared regularly at the parish and neighbourhood festivals. When not out, he can be visited at the Cotxeres de Sants civic centre, where he is permanently displayed with his parents.