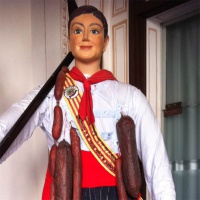 Built in 2006 by
Xavier Jansana

Miquelet is a small giant in the Barceloneta group, the son of Pep Barceló and Maria la Néta. He looks like one of the choirboys that take to the neighbourhood streets in the "Silent Choirs" Festival, held during Pentecost. His clothes, as well as the Catalan sausages and other cured meats hanging down his chest, give us that idea. And his name is a tribute to the patron saint of the neighbourhood, St Michael.

The initiative for making Miquelet came from the Associació de Geganters, Grallers i Bestiari de la Barceloneta. They wanted a gegantó that their young members could carry. They commissioned the image-maker Xavier Jansana to create one and Miquelet was finished in 2006.

He takes part in parades and gatherings with his parents but you can also see him with the other small giants in the group, Ramonet and Ganxut, and, less often, the Torre del Rellotge (Clock Tower). When he's not out, he is permanently displayed at the Casa dels Entremesos, alongside many other Ciutat Vella figures.