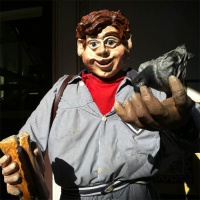 Built in 1988 by
Josep Pito Alcover

Pol is like a typical Vila de Sants boy going to school, wearing a striped class smock with a satchel on his back. In his right hand he has his teatime snack, bread and chocolate, and in his left, a pigeon is nibbling crumbs.

In 1988, with the Colla de Geganters de Sants established and growing, they decided it was time to build a smaller, lighter figure their youngest members could carry. So, Josep Pito Alcover, a giant-maker and plastic artist living in the neighbourhood, created Pol, who made his first public appearance in April that year at the neighbourhood giants' gathering.

Along with the other figures in his group, Pol has a very important place in the neighbourhood festival calendar. Every year he can be seen taking part in events at the annual festival in honour of Sant Bartomeu (St Bartholomew) and he hosts the big giants' gathering held in April. He also regularly takes part in the La Mercè festivities, as well as any parades or celebrations round the city he is invited to. And when he's not out he can be seen at the Cotxeres de Sants civic centre.