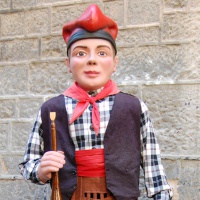 Tinet el Graller (the shawm player) is a small giant in the Casc Antic group, the son of Peret el Fanaler (the lamplighter) and Marieta de l’Ull Viu (with the lively eyes). He represents a child musician, holding a gralla, or shawm, in his right hand and some scores of his mother's dance in his left. As for his clothes, he wears a check shirt, a black waistcoat, a red neck scarf and a traditional Catalan hat, the barretina.

The idea of making Tinet came from the Colla Gegantera del Casc Antic, who decided they wanted a figure their younger members could carry a year after they acquired the two big giants. So they gave the job of building a small giant to the Cardona image-maker Toni Mujal and he finished it in 1996.

The little man was presented at an emotional ceremony held at the Montserrat Monastery, where he was christened Tinet (short for Agustinet) in reference to the Sant Agustí neighbourhood, part of Barcelona's old town, or casc antic. The other festive figures in the group also have names that allude to the Ciutat Vella neighbourhoods.

Ever since he was born, Tinet has accompanied his parents on their outings and all three host a giants' gathering held once a year around St Peter's Day. They always take part in the main Barcelona festivals, La Mercè and Santa Eulàlia, and they are invited to those of other city neighbourhoods and other towns as well. When they are not out, they are displayed at the Casa dels Entremesos, alongside many other Ciutat Vella figures.