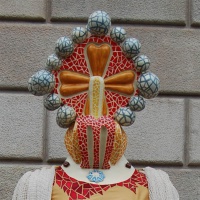 Crespinella is an unusual giant figure, very different to the more typical figures of Barcelona festival imagery: she has a woman's body but her head is a Sagrada Família tower that Antoni Gaudí christened with the same name. Both her head and dress are decorated with the broken tiles, or trencadís, that characterise the work of this great architect.

Crespinella belongs to the Coordinadora de Geganters de Barcelona and is the work of the Cardona image-maker Toni Mujal, who made her in 2002. That was Gaudí Year, which explains the references to his architecture on this small giant.

Crespinella made her public debut in September 2002, during the La Mercè festivities, and she has never missed them since. She can also be seen at the Santa Eulàlia Festival - where she hosts the Trobada de Gegants d'Escola de Catalunya i de la Ballada de Gegantons, together with another small female giant, Laia - and occasionally at other parades and gatherings in the city and elsewhere.

In 2010, for the 3rd Ballada de Gegantons de Catalunya, she was outfitted with new, more stylish and higher-quality clothes, courtesy of her crafter, Toni Mujal.