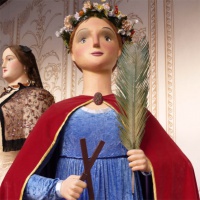 Laia represents a 13-year-old girl who is dressed in fourth-century clothes because, according to Barcelona legend, that is the time when the city's first patron saint, Santa Eulàlia, lived. She holds the attributes of a saint in her hands: the palm, symbolising martyrdom, and the X-shaped cross, which shows she was condemned to death. On her head she wears a crown of natural flowers.

This gegantona is the result of a drawing by Carme Solé that was used to illustrate the Santa Eulàlia festival programme and poster in 1997 and was well received. Following that, the Barcelona Culture Institute, the Ciutat Vella District and the Coordinadora de Gegants i Bestiari de la Ciutat Vella reached an agreement to build a small giant, to enrich the municipal festival imagery and the city's heritage.

Little Laia was commissioned from the image-maker Xavier Jansana, who followed Carme Solé's instructions to make the new figure. She made her first public appearance on 12 February 1998, at the Laias procession, and since then, she has been carried around by the youngest members of the Ciutat Vella's colles geganteres, who also make her dance.

From the outset, Laia's protocol laid down that she could only be taken out for the Santa Eulàlia festivities. The rest of the time she can be visited in the Palau de la Virreina vestibule, where she is always on display.