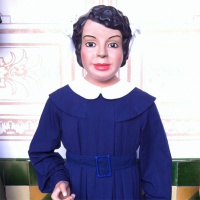 Quimeta Àngels is the adopted daughter of Lola and Sr Ramon, the Gegants del Raval. A small giant, she is dressed as a schoolgirl, in a navy blue smock with the collar of a white blouse sticking out of it.

The story of Quimeta Àngels begins in 1999, when the Raval Giants decided to adopt an orphan from the house of charity, Santa Joaquima Vedruna. The adoption was not officially formalised until Lola and Sr Ramon got married in June 2000, at the Sant Just neighbourhood festival, which this comparsa hosts.

Master giant-maker Toni Mujal made the new gegantona and she made her first public appearance on 11 March 2000, during the celebrations for the 125th anniversary of a local school, the Escola Vedruna Àngels. Since then, it has been usual to see her at parades and giants' gatherings in her neighbourhood and across the city, accompanied by her parents and often the most recent addition to their group, a nan (dwarf) called Manolito.