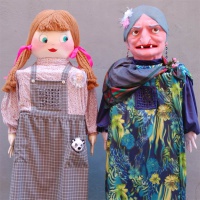 Àvia Martina and Cristi are two gegantones who belong to the La Verneda giant-carriers' group and are parade-group companions of the gegants, or bigger giants,Martí and Dolça. Martina represents an elderly lady with grey hair and a smile that shows very few teeth, wearing a house coat with a flowery pattern. Cristi, on the other hand, is a little girl, who could be her granddaughter. She has two ponytails tied with pink ribbon and a teddy bear's nose is sticking out of her dress pocket.

Both figures belong to the Casal de la Gent Gran de la Verneda and are the work of members of this elderly centre. The àvia was made from a standard capgròs ("big head")figure they already had and Cristi was made from scratch, as if she were a rag doll. They were finished in 2010, in time to appear at the neighbourhood festival in November.

Àvia Martina and Cristi take part in a gathering of giants during La Verneda's annual festival, in honour of Sant Martí, on the second weekend of November. They can also be seen at the La Mercè festivities and at parades and other events in the nearby neighbourhoods, always carried by the youngest members of the Colla Gegantera de la Verneda-Sant Martí.