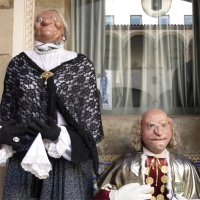 Built in 1999 by
Francesc Jové i Ribera

Built in 2000 by
Francesc Jové i Ribera

The Avi d’Orient and Àvia Orfila are a couple of likeable gegantons who represent a fantastic old man from the far East, dressed as a magician, and a little old lady from the old town of Sant Andreu de Palomar. Legend has it that the Kings of the Orient brought a boy in the colla gegantera an àvi (grandfather) and that explains the old man's name. They called the old woman Orfila in honour of the neighbourhood square, where the old Sant Andreu town hall stands.

The two giants are owned by the Jové Tarrida family, who have given them to the Germandat de Trabucaires, Geganters i Grallers de Sant Andreu de Palomar. They are very light and perfectly suited to the youngest members of this group. The artist Francesc Jové was given the job of making them, which he did between 1999 and 2000. They were immediately introduced to the public and since then they have never failed to turn out for the important dates in the neighbourhood, especially the annual festival at the end of November, as well as other giants' gatherings they are invited to.

Both figures have had to be remodelled a few times since they were created because the materials they were first made with have gradually deteriorated over the years and because of the number of times they have been taken out.

The Sant Andreu avis have their own dance: "Sol solet", a popular song arranged by Enric Montsant. The choreography for it was thought up by the group of geganters that carry them.

When they are not out, the Avi d’Orient and Àvia Orfila are displayed at the Centre Municipal de Cultura Popular de Sant Andreu, in Plaça de Can Galta Cremat.