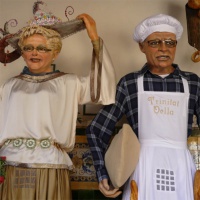 Daniel and Teresa are a couple of gegantons linked to the Colla de Geganters de la Trinitat Vella. They represent two very well-known bakers actively involved in the social life of the neighbourhood.

The gegantó portrays the baker Daniel Jordà, with his apron and hat and two baguettes sticking out of his pockets. In one hand he is holding a baker's peel with some bread rolls on it. Under that arm there is a loaf of bread, which makes you think of the Catalan saying néixer amb un pa sota el braç (to be born lucky but literally "to be born with bread under your arm") which reminds us the bakery where he works existed before him and the trade has accompanied him all his life. With the other arm he is holding a bag of flour, a basic ingredient of his trade.

The gegantona is the image of another baker, Teresa Peña, who is typically depicted wearing a foulard round her neck. This giant figure also symbolises Ceres, the Roman goddess of agriculture, especially wheat and bread. She has a crown of poppies on her head and some ears of wheat in her hand: a reference to the goddess and also wheat fields, where both plants can be found. Above her head she is holding a plate with two cakes, a mona de Pasqua and a tortell de Reis. She wears a Roman tunic and a belt with 11 suns, the number of grandchildren Teresa has.

These two small giants are the work of Dolors Sans, a specialist in making popular figures, who produced them in 2010. They were unveiled on 30 October and immediately started to take part in the city's parades and giants' gatherings, always carried by the Colla Gegantera de la Trinitat Vella.