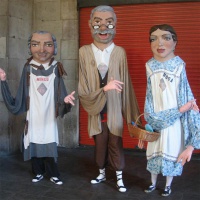 The Sant Antoni Market's gegantons de motxilla (backpack giants) are an inseparable foursome who represent various market trades. Rosa is a fishmonger whose basket is loaded with fish; Sisquet is a loader; Mingo is a pork butcher, with a knife in his hand and a string of botifarra sausages round his neck; and Amador is a second-hand bookseller, like those who set up their stalls at the Sunday market.

At first there were only three of these giants: Mingo, Rosa and Sisquet. The master image-maker Domènec Umbert made them and they were unveiled for the market's centenary in 1982. Amador joined them in 1988. He was made from a capgròs ("big head") figure, bought from the Barcelona shop El Ingenio, which originally represented the woodcarver Geppetto in Pinocchio.

The Sant Antoni Market gegantons have their own music, with a choreography by Anna Cercós, Marta Cercós and Lídia Tuset that they dance to. And, together with the two gegants Tonet and Rita, they are the stars of the Sant Antoni Abat Festival held around 17 January. You can also see them at other giants' gatherings and parades round the city, but always carried by the young members of their neighbourhood colla gegantera.