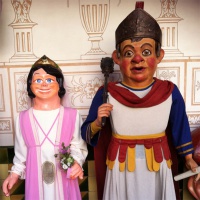 Pippo and Gal·la are a couple of small giants belonging to the Geganters de la Plaça Nova, in the Barri Gòtic. They are two noble children from Barcelona's Roman wall, with clothes very similar to those worn by their parents, the big giants Roc and Laia.

The Plaça Nova colla had the idea of making these two gegantons when they realised they needed to attract young children to the world of giants. They commissioned Manel Casserras i Solé to create Pippo (Filippo) and he did it by making use of a capgròs ("big head"), Patufet, that Xavier Jansana had made years earlier. He finished Pippo in 2007, the centenary year of a local dwarf, the nan Cu-cut, and he was presented at the Sant Roc Festival giants' gathering.

His sister Gal·la, made by members of the festival association, the Associació de Festes de la Plaça Nova, was presented in 2011, to mark the 25th anniversary of Cu-cut's reappearance. Her size means she can be carried by the smallest geganters and geganteres.

Along with the other figures in their group, Pippo and Gal·la host the Plaça Nova festivities around 16 August, the Feast of St Roch (Sant Roc). Festival imagery has always featured prominently in these festivities, which have been held without interruption since 1589. And every year the Plaça Nova colla organises a giants' gathering for them with most of the Ciutat Vella festival figures.