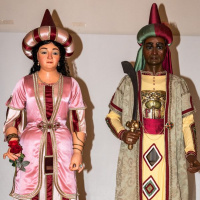 Built in 2014 by Manel Casserras i Soler

Built in 2016 by Teresa Casserras i Soler

Mustafà Petit and Elisenda Petita del Pi (Little Mustafà and Elisenda) are child copies of the famous Pi Giants. They were designed to be carried by children aged between six and ten. So they are considerably smaller than the original figures but they have the same features: their face, clothes and symbolism. Little Mustafà bears the Pi parish church coat of arms, the curved sword and characteristic scimitar that sets the Moorish king apart, engraved on his chest. Little Elisenda is dressed in pink, with very long hair that can be combed in various styles and the typical conical hat the adult Elisenda wears too.

Both figures were unveiled during the La Mercè festivities: Mustafà in 2014, with the illustrator Roser Capdevila as his godmother, and Elisenda in 2016, sponsored by the children at Sant Joan de Déu hospital. Mustafà was created in Solsona by the master image-maker Manel Casserras i Solé and his clothes were made by members of the giant group, faithfully following the big giant's clothing. Elisenda, who was born two years later, was also made in Solsona, by Teresa Casserras i Moreno. In addition, Little Mustafà and Elisenda are the first figures in the city's festival imagery to have been financed from an online crowdfunding campaign.

The pair dance with the rest of the Gegants del Pi family and take to the streets during the Santa Eulàlia, Sant Josep Oriol and La Mercè festivals, and wherever they are invited. For the rest of the year they are on display at the Casa dels Entremesos, with other figures from Ciutat Vella's festival imagery.