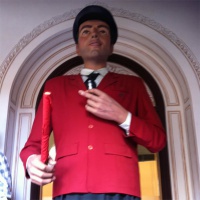 Trenot is a giant who looks like a good-natured, friendly station master. He is dressed in a red jacket and black skirt, colours reminiscent of the uniform worn by Catalan Railways staff, and he has three accessories typical of his profession: a whistle, a flag and a peaked cap.

Trenot was created in 2004 to mark the 25th anniversary of the Catalan Railways – Ferrocarrils de la Generalitat de Catalunya – which is the company that owns him. He is the work of Jordi Grau, a sculptor and image-maker at El Drac Petit, a sculpture and popular imagery workshop in Terrassa.

Trenot was officially unveiled at the 2004 Sarrià annual festival in October, with Pau and Llibertat, from Vila de Gràcia, and Manelic and Núria, from Ribes de Freser, as his godparents. They all then took part in a parade round the streets of the neighbourhood, accompanied by more giants from round Catalonia.

The Colla Gegantera de Sarrià are the custodians of Trenot, as well as other giants, and they take him to festivals and parades all round Catalonia. When he's not out you can visit him, because he is on display at the Sarrià-Sant Gervasi district offices, together with other local giants he goes out with.