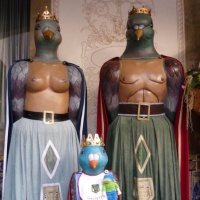 Colom and Coloma, the Gegants Coloms de Sant Andreu de Palomar, break with the traditional image of giants in a physical sense. They are half human and half bird, with a bare human body and the head and wings of a pigeon (colom).

The idea to make this giant couple came from the neighbourhood association, the Germandat de Trabucaires, Geganters i Grallers de Sant Andreu de Palomar, following the demise of Jordi and Rosa, two home-made "backpack" giants that had a very short life. The association decided to create some new giants identified with the neighbourhood, with pigeon features given the name Palomar, a reference to all the pigeon lofts there used to be in the old parish. The task was given to the master image-maker from Cardona, Toni Mujal. He finished them in 1989 and they made their public debut the same year, at the neighbourhood festival.

After years of dancing and going for walks, the couple decided it was time to add to the family. In 2005 Coloma laid an egg which could be seen on their outings over the next nine months. Finally, on 10 June 2006, their only child, Galtetes, was born, and since then it has been usual to see them all together.

The Coloms have their own dance too: the "Marcha do Entrelazado de Allariz", a traditional Galician song adapted by the famous gaitero, Carlos Núñez. People can see them dance every year at Sant Andreu's annual festival, along with other neighbourhood figures. They also take part in numerous parades and giants' gatherings in Barcelona and elsewhere.