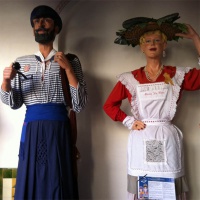 Built in 1992 by
Xavier Jansana

Built in 1992 by
Xavier Jansana

Pep Barceló and Maria la Néta, the Barceloneta giants, represent a couple of typical characters from this maritime neighbourhood. He is a fisherman and she is a fishmonger at the market.

Legend has it that Maria is a Caribbean giant, the granddaughter (néta) of a city giant who fell in love with pre-Olympic Barcelona and stayed here. Pep, on the other hand, is an Atlantic fisherman, who arrived in Barceloneta with Narcís Monturiol, aboard the submarine Ictíneo II.

Both were born in 1991, thanks to the efforts of the Associació de Geganters, Grallers i Bestiari de la Barceloneta. They looked for symbolic features that identified the neighbourhood to create their own giants with. Then they commissioned Xavier Jansana to do it.

They first appeared in public during the festival in honour of Sant Miquel (St Michael), the patron saint of Barceloneta, in 1991. Since then they have taken part in all the La Mercè and Santa Eulàlia festivals, as well as in other celebrations in Barcelona, Catalonia and even elsewhere.

In 1996, for their fifth birthday, they unveiled their own dance: the Pep Barceló and Maria la Néta habanera, a musical composition by Antònia Vilàs, with a choreography by the Abellán brothers, Albert and Ricard, who are members of the Badalona giants' group.

Then, in 2001, after an active ten years, the couple got married. The wedding ceremony was conducted by the "big head" Msgr Filomeno, while the Gegants del Pi and the Gegants de la Ciutat acted as the best men and bridesmaids. Another five years later, in 2006, the couple gave birth to a son, Miquelet, a smaller giant who represents one of the choirboys who appear in Barceloneta for the Pentecost at the Cors Muts festival.