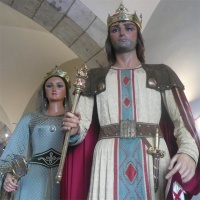 Built in 2006 by
Manel Casserras i Soler

Built in 2006 by
Manel Casserras i Soler

There is a long giant tradition in Barcelona and we have news of their existence from the 15th century. There is documentary evidence that, among the many street performances in the 1424 Corpus Christi procession, there was one of "King David with the Giant". The giant in question, the first recorded in Europe, represented Goliath and had been paid for by the city. It is regarded as the first gegant de la ciutat. As the years passed, this Goliath became detached from the paratheatrical performance and we find him parading round the streets of Barcelona alone until 1568, when documents record the existence a female giant, a geganta.

We do not know exactly how many different figures and couples have strolled round Barcelona's streets as the gegant and geganta of the city. What we do know is that, at the end of 16th century, their performance, or entremés, was in decline and had even disappeared but in 1601, as a result of the celebrations organised for the canonisation of Sant Ramon de Penyafort, it returned to the streets with a new lease of life that has not been lost.

In 1929 the City Council decided to go for a totally new couple of giants. The one they had, although only 40 years old, was very shoddy. Their lack of artistic value, plus the fact the city was ready to hold the International Exhibition, meant it was time to renovate them. Francesc Labarta was commissioned to take charge of the construction of a new couple representing the Reis Catòlics, or Catholic Monarchs. These are the figures you might say have come down to us, taking into account various modifications and the replicas that have been made.

On 19 April 1929, Labarta submitted two budgets to the City Council with details of the work that need doing and the craftsmen that would do it. The first came to 48,693 pessetes and the second to 43,254.13. The project went ahead on the basis of some figures drawn by Labarta himself. Casa Paquita made the clothes and Tallers Renart made the faces, heads, hands, arms, bodies and supporting frames.

This couple had little work done on them, aside from the routine repainting. In fact, in the 1930s, they did very little. They stopped going out for Corpus Christi in 1931 until 1939, when they reappeared under the new Franco regime. The male figure's arms were changed for those of the 1925 giant, although it has not been possible to determine when, along with his features, sceptre and Christian orb. Around 1949, according to the photographs, the female figure got a new head because the original was damaged when there was a flood at the municipal stores in the La Sagrera neighbourhood, where they were kept.

When the Gegants del Pi were recovered in 1960 it was realised there was a need to renovate the Gegants de la Ciutat again. An article by Sempronio describes the details and curious aspects of what was a patchy restoration, which basically just touched the surface and saw the faces repainted.

The total renovation that was hoped for came in 1961. Initially, the new couple's debut was planned for Corpus Christi but it was not possible to hold it until the La Mercè festivities. Evarist Mora was commissioned to take charge of making the replicas and he designed the models. The task of making the bodies, heads and hands was given to the Solsona giant-maker Manel Casserras i Boix. He used the previous couple as a  reference but introduced some important changes, for example, swapping the cardboard crowns for gold-plated brass ones with precious stones. Their hair, previously part of the sculpture, was swapped for wigs, to give them a more realistic appearance and, notably, their faces were stylised, so they lost their former robust appearance. Their clothes were ordered from Casa Llorens, the theatrical outfitters.

On the Monday after Corpus Christi in 1966, on their way back from the procession in Barceloneta, the giant couple had a dramatic fall. On this occasion, the accident was not the fault of the geganters around them, nor was it caused by their own carriers tripping. A Seat 600 hit the couple by Pla de Palau. The geganta still recalls the accident: her lopsided face, still very noticeable today, bears silent testimony to it.

In the 1970s the master craftsman Domènec Umbert took on the job of renovating the couple. According to his personal records, that was in 1972, although other sources suggest it was 1970. The order came from Casa Paquita. When the two gegants reached Mingu, as the craftsman was known in the giant community, they were in a terrible state. Their heads were full of plaster, bits of metal and wood as a result of some unfortunate repairs that made the giants very difficult to carry. Their clothes also included some long, majestic capes that increased their weight and, as in the case of the previous model, were made by Casa Llorens. This couple, whose heads have been preserved, although they are in a very bad state, are still remembered by some carriers, geganters active in groups belonging to the Coordinadora de Geganters de Barcelona.

By 1985 the Gegants de la Ciutat were in the hands of the Coordinadora de Geganters, who decided to call them Jaume I and Violant d’Hongria and make a new replica couple, because the one in use had suffered the same fate as their predecessor: fixed and repaired by inexperienced hands, plaster patches, etc., etc. All that had turned the giants into two really heavy figures that were practically impossible to carry. Once again Domènec Umbert was given the job and he put all his skill into it, so that in 1986 they were able to unveil new clothes based on the 1962 model. The sculpture part of this couple is still preserved.

Yet another couple appeared during La Mercè in 1991. The aim of making this copy was to make them easier to carry, because the papier-mâché figures made by Domènec Umbert were still very heavy. The task of making them was given to Manel Casserras i Boix, the craftsman from Solsona, now deceased. He made replicas out of fibre glass and polyester that reduced the weight of the giants considerably. Still, this was not a total renovation: they made the most of the clothes and accessories of the previous couple, along with the crowns, wigs and frame supports.

In 1999, though, a thorough and daring renovation was carried out resulting in a couple of giants that left no one indifferent. Barcelona City Council's Institute of Culture held a Gegants de la Ciutat costume competition aimed mainly at young designers and design students. The shortlisted outfits were put on public display at Bulevard Rosa on Passeig de Gràcia for a public vote. The winning idea was that of Yolanda Saura, who proposed clothes with a largely contemporary look and clear references to Modernista Barcelona. The female giant's outfit had Gaudiesque forms, colours and allegories with trencadís techniques. The male's clothes, on the other hand, had an austere, urban look, set off by a maroon knitted scarf. A design that was very different to what was considered the typical dress of traditional giants at the time.

Apart from the clothes, the giants too were made anew. Jordi Grau's Terrassa workshop, El Drac Petit, made new heads, hands and bodies. He made a mould for the new faces and took a copy of the 1985 faces made by Domènec Umbert 1985, fixing the geganta's lopsided face, the result of the accident in 1966, which had been copied time after time in subsequent replicas. Ramon Roig, of Indumenta in Terrassa, made the clothes based on Yolanda Saura's designs. The jewels were designed by Tous, the jewellers, while the wigs were the work of the hairdressers Bascón in Badalona.

To celebrate the 20th anniversary of the Coordinadora de Geganters de Barcelona in 2005, the 1999 giants were withdrawn and the 1991 couple returned to public life. They were thoroughly remodelled in 2006, this time by Manel Casserras i Soler, who worked on what his father, Manel Casserras i Boix, had made in 1991. The Coordinadora de Geganters proposed the new image of the Gegants de la Ciutat should mark a return to the classic giant look. The couple were introduced to the public on 22 April, the eve of Sant Jordi, St George's Day, in 2006, and the following day they were exhibited in City Hall, taking advantage the open day. It should be noted that, while this renovation was carried out in 2006, it was planned much earlier with the idea the couple would be unveiled two years before, for the Universal Forum of Cultures.

These new giants were conceived by Toni Lucena, Josep Maria Blanes and Albert Martínez. It is worth saying that of all the long line of City Giants that began in 1929, this latest couple is the one with the most intended symbolism. Their clothes, accessories and jewels reflect Barcelona and national issues, sustainability, dialogue and values. And, as an aside, they have two types of headwear: the crowns they wear within Barcelona's municipal boundaries, plus a crest for him and a hat for her.

The current Gegants de la Ciutat are a hybrid of the previous two couples. The body, heads and hands reflect the work of Jordi Grau, at El Drac Petit in Terrassa, in 1999, while their clothes and finery correspond to the 2006 model of Manel Casserras i Soler.

The dance tells a story in three parts with the following line: in the first part, called de coneixença or d’arribada, the meeting or arrival part, the geganta arrives by Carrer de la Ciutat, when the dance is performed in Plaça de Sant Jaume, and she meets the gegant, with whom she exchanges greetings. The second part is known as the  festeig, or courting: in a series of alternate turns, the pair establish a kind of courtship. The third and final part is a fast corranda dance that encourages clapping, when the couple celebrate their love in a big festa.

The Gegants de la Ciutat have been accompanied for centuries by the flabiol flute and the tamborí drum but during the 2009 La Mercè an official band was presented that accompanies them now. Called Els Perdigots, they are a cobla of flabiols and a fiscorn horn that brings a new, sharper sound to the processions and seguicis they take part in.

The Gegants de la Ciutat, folk figures belonging to Barcelona City Council, take part in the key moments of Barcelona's festivals, as members of the seguici popular. During La Mercè you can see them at the toc d’inici, the seguici d’autoritats, the cavalcade and the toc a plegar. You will find them at the trobada de gegants during Santa Eulàlia and in the procession for Corpus Christi. They can occasionally be seen representing the city at events outside Barcelona as well. When they are not out on the streets, they are displayed behind glass at the Palau de la Virreina.