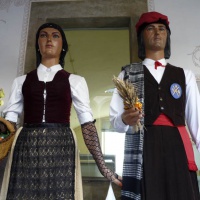 Andreu and Coloma are a farmer and an eldest daughter, or heiress, from the old town of Sant Andreu.

These Sant Andreu Giants were based on a series of classical figures made by the Barcelona shop El Ingenio. So their appearance reminds you of other Catalan giants. They were commissioned by the Sant Andreu District Council, who wanted to create some representative figures for the neighbourhood. In 1982 the handsome couple were ready to be presented at the local annual festival, with names that also identified them with the old town: Andreu (Andrew), the saint who gives the town its name, and Coloma, a reference to the abundance of pigeon lofts (palomars) in the old parish of Sant Andreu de Palomar.

Although they belong to the Sant Andreu District, the local giant-carriers' group, the Germandat de Trabucaires, Geganters i Grallers de Sant Andreu de Palomar have always been responsible for taking them out and making them dance at giants' gatherings and parades held in the city and elsewhere, often with the neighbourhood's other festival figures.

Andreu and Coloma are the hosts of the big Sant Andreu annual festival parade, which is held on the last weekend in November. That is the only time you can see them doing the Moors' Dance, composed specially for them by Enric Montsant.