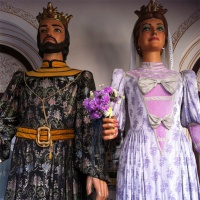 They were both designed and modelled by the master Barcelona giant-maker Domènec Umbert, who made them in the parish itself, and they made their first public appearance in June 1982. Since then they have also been taken out for the El Clot and El Camp de l’Arpa festivities, as well as the two big city festivals, La Mercè and Santa Eulàlia.

In 1999 the sculptor Manel Casserras i Solé was given the job of restoring the giant couple.

Quintí and Peguera are accompanied on their outings by three "big heads" — a Catalan figure and two macebearers — and they hold their annual gathering at the El Clot-Camp de l’Arpa festival, on the first weekend of November.