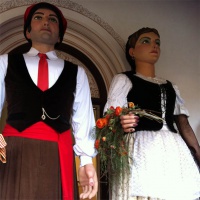 Gervasi and Laieta were created as a couple of giants for Sarrià and Sant Gervasi de Cassoles. They are a farmer and his wife from the end of the 19th century, typical figures in the two old towns that now form the Sarrià-Sant Gervasi District.

They are the work of Domènec Umbert and they made their first public appearance in 1987, in the Galvany neighbourhood. Later, in the year 2000, they were restored by the Terrassa sculptor Jordi Grau, at the El Drac Petit workshop.

A new sardana, "En Gervasi i la Laieta", was composed by Tomàs Sagué i Camó and arranged by David Puertas i Esteve, and became the couple's own dance. You can see it performed every year at the Sarrià annual festival, on the first weekend of October.

The Colla Gegantera de Sarrià are responsible for taking Gervasi and Laieta out dancing and on walkabouts, as well as to festivals and parades all round Catalonia, often with their son, the smaller giant Blauet. When they are not out and about, you can visit them at the Sarrià-Sant Gervasi district offices, where they are on display with other local giants they go out with.