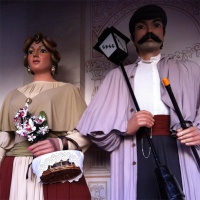 Peret symbolises a trade that was very typical of the area at the end of the 19th century, that of the fanaler or lamplighter. He was called Peret in honour of the neighbourhood's patron saint, Sant Pere (St Peter). The street lamp and torch in his hands provide a link with his occupation and they light up when it is dark.

Marieta is based on a real character who lived in La Ribera. According to legend, she used to go to the Cat Fountain on Montjuïc with a soldier who later got her pregnant and left her. This misfortune forced her to flee the neighbourhood and gave rise to the song that is sung to this day. She wears typical period dress, like Peret, while carrying a basket with carnations in one hand and a lace handkerchief in the other.

The story of the Casc Antic giants goes back to the early 1990s. A group of young popular culture enthusiasts wanted to take out the neighbourhood giants, which had been locked away in the Sant Pere de les Puelles parish church premises for years, but the priest said no. So they decided to make some new ones to represent all the old quarter and commissioned Toni Mujal to do them.

They were unveiled on 5 February 1995. It was a very unusual event because all the Ciutat Vella giants wanted to be their godparents.

Peret el Fanaler and Marieta de l’Ull Viu celebrate the Sant Pere festival on 29 June with a gathering of giants. They also take part in the main city festivals - La Mercè and Santa Eulàlia - and, if possible, those of other Ciutat Vella neighbourhoods and places they are invited to.