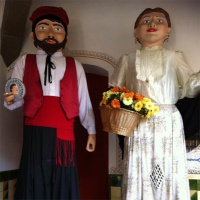 Built in 1982 by
Montserrat Cuxart i Alícia Gascón

Built in 1983 by
Montserrat Cuxart i Alícia Gascón

Joan el Portuguès and Marieta de la Font del Cuento, better known as the Guinardó Giants, represent a couple of former Guinardó residents. They are dressed as country folk and linked to the neighbourhood's history and customs.

Joan the Portuguese reminds people of a man from the countryside who lived near Carrer de la Garrotxa and who, they say, made counterfeit silver duros, five-peseta coins. That's why he's holding one. Marieta was the heiress to a farmhouse in the area who told stories to children at the Cuento fountain in Guinardó Park.

They came out of a drawing competition held in Guinardó schools and associations to choose some characters that typified the neighbourhood and would serve as a model for building the giants. A vote was held and Joan el Portuguès and Marieta de la Font del Cuento were chosen. Then Montserrat Cuxart and Alícia Gascón were given the job of making them.

Joan was finished in 1982 and first appeared at the Guinardó annual festival that year. Marieta was introduced at the 1983 festival, where the two giants danced together for the first time. The figures that take to the streets these days are the result of a complete overhaul that Montserrat and Alícia carried out in 1995.

The Guinardó Giants have their own dance, choreographed by Glòria Mestre, and host the annual giants' gathering held in the first fortnight of May at the neighbourhood festival. They also walk about and dance in other parades and gatherings around the city, and they are always carried by the Colla de Geganters del Guinardó.