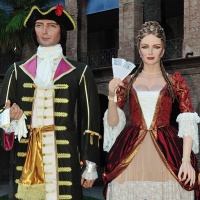 The Giants of the Tricentenary represent Josep Galceran de Pinós i de Rocabertí, better known as the Baron of Pinós, and his wife, n’Agustina d’Urries i de Gurrea. He was a historical figure with strong links to the territory now occupied by the Nou Barris district. He was a very important politician who led Barcelona at the start of the 18th century and defended the city during the siege in 1714.

They are giant figures built with close attention to historical detail, with advice on the sculpture, clothes, hairstyle, accessories and so on from the historian Francesc Riart, the Coronela de Barcelona and the giant-carrier Abel Plana. Jordi Grau, at the El Drac Petit workshop in Terrassa, was given the job of making the sculpture and Goretti Puente, an expert in reproducing historical costumes, the clothes.

Historical accuracy can be seen, above all, in the clothing of the giantess, whose hair-style and accessories follow the fashion of 18th-century Barcelona. She sports the characteristic corset-and-tail outfit prepared with rich fabrics and decorated with points and laces. She also bears a fan and pearls –two very common elements among Baroque-period ladies– as well as a very elaborate hairstyle, prepared by the Casa Damaret.

The Tricentenary Giants are the city's newest giants: Josep was made in 2013 and Agustina, in 2014. He was sponsored by Coronela de Barcelona, a historical recreation of the militia that defended the city during the siege of 1714, whereas she was presented in July 2014 at the Palau de la Generalitat as part of the Tricentenary's commemorative events.

The Gegantera de Nou Barris group was founded in 2012 to take charge of Baró and Trini, the neighbourhood's giants that lacked any group for twenty years to carry them around in the parades. The new association that was very enthusiastically launched immediately learned how to carry the giants along and get them dancing. And a year later it presented the Tricentenary Giant, keen to turn him into the symbol of the commemorative symbol of the siege of Barcelona.