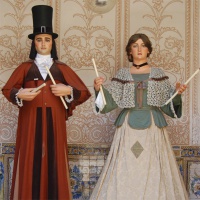 Built in 1919 by
Emili Ferrer i Espel

Built in 1919 by
Emili Ferrer i Espel

The "Hereu" and the "Borda" (Heir and Illegitimate Daughter) are the new Casa de la Caritat and Corpus Christi Giants and they belong to the Barcelona Provincial Council, although they've been given to Ciutat Vella and are managed by the district's giant group coordinating committee, the Coordinadora de Colles de Gegants i Bestiari de la Ciutat Vella.

The new couple replaced the old Casa de la Caritat and Carnival Giants, which were in a very bad state of repair after being taken out over so many years and were stored away so they could be preserved. Emili Ferrer i Espel made the new giants in 1919 and, from the very beginning they were regular participants in the La Mercè parade and the Corpus Christi processions organised by the Casa de la Caritat (House of Charity) and other city parishes.

They were stored with the old giants in 1964 and then, in 1987, the Barcelona Provincial Council decided to restore them and commissioned the master image maker Domènec Umbert to do it. Since then, neither of these two giants has missed a Corpus Christi procession or the cercaviles or trobades geganteres, the musical parades and giant gatherings held during the La Mercè and Santa Eulàlia festivals. Together with the old giants, they also head the giants' exhibition held each year during the La Mercè festival, the Mostra de Gegants de Barcelona.

The new giants can be visited at the Casa dels Entremesos, where they are displayed when they are not out on the streets.