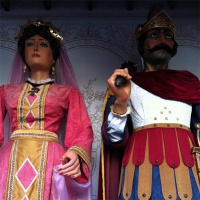 Built in 1992 by
Manuel Casserras i Boix

Built in 1992 by
Manuel Casserras i Boix

Roc and Laia, the new Plaça Nova St Roch Giants, are of the classic, traditional kind, Roman figures that are very different to the ones we usually see today. They represent nobles of Barcelona's Roman wall and figures from the Occitan city of Montpellier, where St Roch was born.

The couple are the hosts of the Plaça Nova festival, which takes place around St Roch's Day. It is a traditional celebration that has been held without interruption since 1589.

The new figures are replicas of the old Plaça Nova Giants, which date from 1906. The image-maker Manel Casserras i Boix was commissioned to make them in 1992 with the aim of preserving the old ones which, since then, have been kept at the Casa dels Entremesos and only appear for the St Roch festivities. Laia also comes out for the Laies procession on 12 February.

The new giants are dressed just like the old ones, following a 1955 design by Antoni P. de Rigau. The main difference between them and the old ones, aside from the fact they are much bigger, is that Roch carries a staff, as he did back in 1906, and Laia wears a metal tiara with precious stones, whereas the crown on the old Laia was part of the sculpture.

The Plaça Nova giants have had their own dance since 1984. This is the Santa Eulàlia dance, an anonymous tune dating from the 18th century. In the past they went out with a drummer but these days they are accompanied by the Pessigolla shawm players.

Roc and Laia have a classic, serious look that means they aren't out of place in any giants' retinue, parade or procession. Their performances have been numerous and varied, in Barcelona as well as in Catalonia, North Catalonia, the Valencia Region, Andorra, Occitania, France and even Japan.