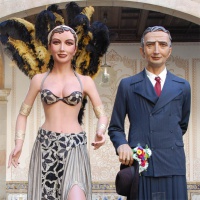 Armand from Montjuïc and Rosa from Paral·lel, better known as the new Poble-sec Giants, are a couple of modern figures, very different to those of traditional Barcelona festival figures. She is a scantily dressed Paral·lel cabaret star with large green feathers on her back. When she dances you can catch a glimpse of her thigh through her skirt. He is a rich, smart Barcelona gent who frequents cabarets. In one hand he has a bunch of flowers for the artiste and in the other he is hiding something a lot more valuable: a pearl necklace.

The new giants date from 2001, and they were made so the old ones, the Three Chimney Stacks, could retire. They were made by Jordi Grau, the sculptor at the El Drac Petit workshop in Terrassa, and they made their first appearance in April that year, at an event held in Mirador del Poble-sec Park.

Armand and Rosa have their own dance, with music composed by Carles Reig. They come out to dance every year at the neighbourhood festival giants' gathering, which takes place around St James' Day, in July. You can also catch them at parades and gatherings in other Barcelona neighbourhoods, where they are always accompanied by the local giants group, the Colla de Geganters i Grallers del Poble-sec.