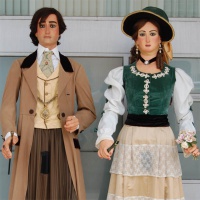 Restored in 1997 by Manel Casserres i Solé

Restored in 1997 by Manel Casserres i Solé

Known to have existed since 1780, the gegants petits del Pi have always been very popular, especially for their fine features and small stature, which makes them different and feel closer, in contrast to other, more solemn-looking giants. They were presented to the Duke of Lancaster in 1798 because he allowed them to appear in the Corpus Christi procession again, which they had been banned from doing in 1780 following the royal decree issued by Charles III.

It seems that they did not have a supporting frame at first. Consequently, everyone could see the carrier's legs, as they could with the small Valls giant, the gegantó Lladrefaves. The fact that they were smaller meant they could take part in the saraus Barcelona' aristocracy held at the time, as Rafel Amat i de Cortada, the Baron of Maldà, noted in his diary, the Calaix de sastre (Taylor's box).

In 1858 they acquired a new image: he became a Hungarian official and she became Sra Peruzzi from the opera La Traviata. Then in 1870 they were stored away in some boxes with the big giants, and they did not reappear until 12 June 1960.

In 1985 they were renamed Josep Oriol and Eulàlia and in 1997 some replicas made their first appearance. These are the figures we see walking and dancing on the streets today in the cercaviles and passejades. The originals are dressed as they were found in 1960, with the appearance of a nineteenth-century lady and gentleman. The copies are dressed as they were in 1858, with clothes that were renewed in 2013.

The gegantons or small Pi giants are a very active couple and they can usually be seen in cercaviles and passejades, both in Barcelona and around Catalonia. They have even been to Japan. They are always at La Mercè, for the festa major morning, the Xambanga and the cavalcade. They can also be seen in the Corpus Christi procession, at the Santa Eulàlia festival giants gathering and the Sant Josep Oriol festival, which they host.

When they are not involved in a festival they are always on display. The originals are can be seen in a glass case in the Pi church atrium, while the replicas are at the Casa dels Entremesos.