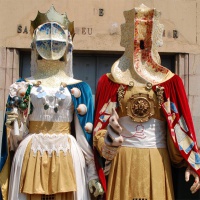 King Gaudí and Queen Pedrera are the two giants that lead the Casa Milà (Pedrera) parade group. They have a Gaudiesque appearance and wear smart clothes adorned with natural elements, such as fruit and clams, from land and sea. These are complemented with trencadís detailing and other features that symbolise Gaudí's work.

The story of these two giants goes back to 1998, when the Catalunya Caixa Foundation wanted to commission the construction of a couple of figures that would represent the Casa Milà, which had just been rebuilt.

And that's what happened. The parade group, made up of the king and queen, a couple of warriors and two "big heads", were built by the master giant-maker Toni Mujal, and the same year they made their first public appearance at the Casa Milà restoration party. Then they started to take part in parades and giants' gatherings in their neighbourhood and around the city, notably the La Mercè and Santa Eulàlia festivals.

For a good six years the giants were left in storage but they reappeared once again in 2011, after they had been restored by Toni Mujal. He repainted them, gave them new clothes and made them lighter so they would be more comfortable to carry. That was when the Catalunya Caixa Foundation handed them over to the Coordinadora de Geganters de Barcelona, which has been responsible for carrying them at public festivals and making them dance ever since, as well as maintaining and looking after them. When they are not out and about, they are on display at the Eixample District Offices.

The Pedrera Giants have their own dance. Joan Amargós created the music and it was choreographed by Abel Plana, Maurici Arias, Josep Maria Blanes, Miquel Burgès and Nicolás Alonso, who are members of the coordinating committee, the Coordinadora de Geganters de Barcelona.